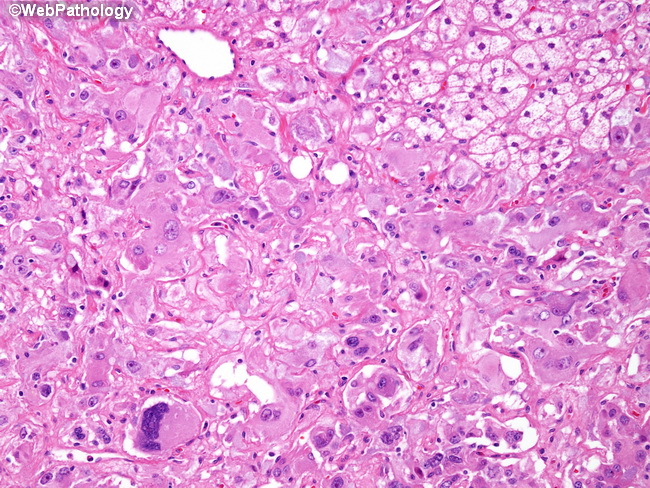 Comments:
Same case as the previous image. Small nests of tumor cells with degenerative atypia are present in a background of sclerotic stroma. The cluster of cells with vacuolated cytoplasm in the upper right corner is zona fasciculata. Pharmacologic management of catecholamine excess during peri-operative period is a crucial component of management of pheochromocytoma. This is to prevent dangerous elevation of blood pressure and cardiac arrhythmias that may be precipitated by catecholamine release during intraoperative manipulation of the tumor. Alpha receptor blockade is done one to two weeks prior to surgery with phenoxybenzamine which is an irreversible alpha blocker OR with agents such as terazosin, doxazosin, or prazosin all of which are reversible alpha blockers. Beta blockers are sometimes used to control reflex tachycardia and arrhythmias triggered by alpha blockage. It is important to start beta blockade only after initiating alpha blockade. Agents such as metyrosine are used to block catecholamine synthesis. It works by inhibiting the enzyme tyrosine hydroxylase. Calcium channel blockers lower blood pressure by relaxing vascular smooth muscle. They may be used alone (in patients with mildly elevated blood pressure) or in combination with conventional alpha-blockade. Intravascular fluid management in the immediate post-operative period is important to prevent dangerous hypotension which may follow sudden withdrawl of excess catecholamines.