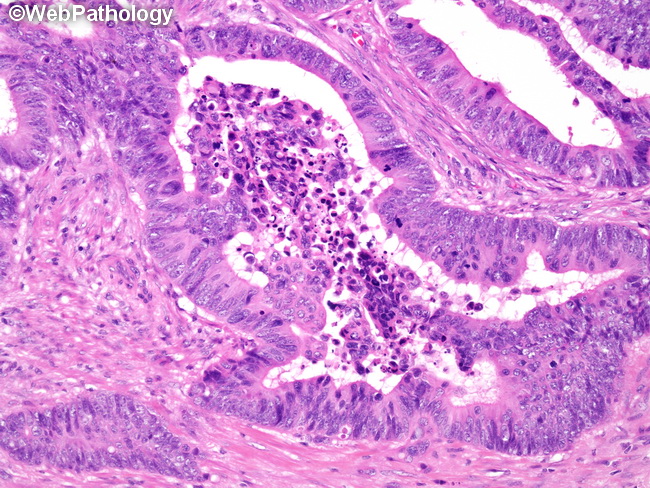 Comments:
The prototypic colorectal cancer is a well-to-moderately differentiated adenocarcinoma consisting of tubular, anastomosing and branching glands in a desmoplastic stroma. The surface component may be ulcerated or show papillary or villous architecture. Residual adenoma is often present at the edge of the tumor. The glands secrete variable amounts of mucin (usually MUC1 and MUC3) and are composed predominantly of columnar cells and goblet cells. The columnar cells have pseudostratified vesicular nuclei with one or more punctate nucleoli. An inflammatory infiltrate of lymphocytes (mostly T-cells), plasma cells, histiocytes and dendritic cells is commonly present in the stroma. The glandular lumen commonly show "dirty necrosis" (shown here) consisting of necrotic cells, cytoplasmic fragments, nuclear debris, and fibrinous material. The tumor may invade through all the layers of the bowel to involve pericolic fat and may even be present on the serosal surface. Perineural invasion and lymphovascular invasion may be present.