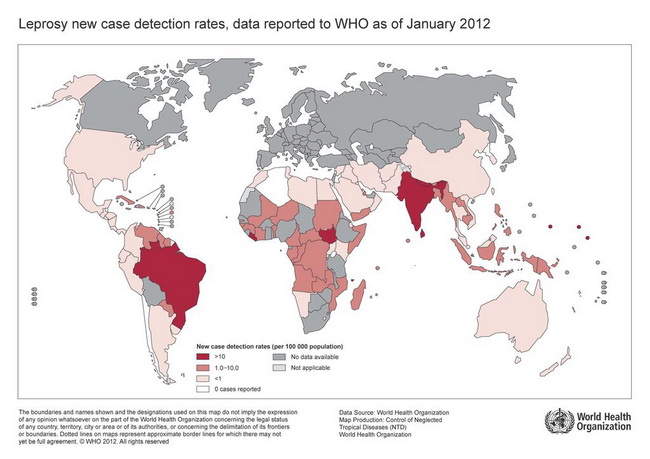 Comments:
Globally: There were 216,108 new leprosy cases registered globally in 2016, according to official figures from 145 countries from the 6 WHO Regions. Two-thirds of all new cases of leprosy are diagnosed in India. An estimated 2 to 3 million people are living with leprosy-related disabilities globally. In the U.S.: Between 150 to 250 new cases of leprosy are reported each year in the United States. In 2015, 178 new cases were reported to the National Hansen's Disease Program which coordinates care, research, and information about leprosy in the U.S. Most of these cases occur in individuals who have lived in the areas of the world where the disease is endemic. In some southern states of the U.S., nine-banded armadillos have been found carrying mycobacterium leprae. Human transmission may occur when people handle these animals. References:World Health OrganizationCenter for Disease Control