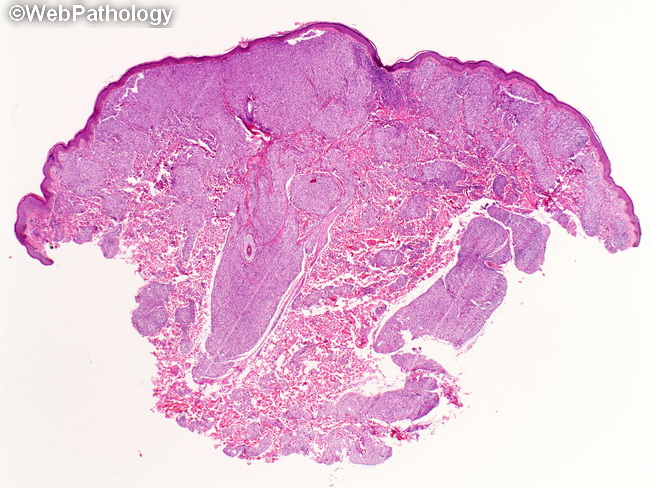 Comments:
The predominant histologic feature in lepromatous leprosy is a diffuse histiocytic infiltrate in the dermis that is not necessarily centered around nerves. A grenz zone of sparing is usually present in the papillary dermis. There are no discrete granulomata. The histiocytes are arranged in poorly-circumscribed masses. Lymphocytes are scarce and those that are present are usually T-suppressor (CD8+) cells. The histiocytes may show vacuolated or frothy cytoplasm with a grayish-blue tinge (on H&E) due to clusters (globi) of leprosy bacilli. With modified Ziehl-Neelsen stain (Wade-Fite stain), the bacilli can be visualized in large numbers in histiocytes surrounding cutaneous nerves, blood vessels, and eccrine glands. In some cases of LL, the histiocytes are spindle-shaped and arranged in a storiform pattern mimicking a fibrous histiocytoma. This variant is referred to as Histoid Leprosy. Pathogenesis: In lepromatous lesions, T-suppressor cells are more numerous. The patient is unable to mount a robust T-cell mediated delayed hypersensitivity reaction to the leprosy bacillus. It has been suggested that T-helper cells may be defective or absent in individuals who develop LL. The type of immune response mounted against the bacilli may be influenced by certain HLA-DR types, Lewis factor, and prior vaccination (e.g. BCG vaccines used in countries like India).