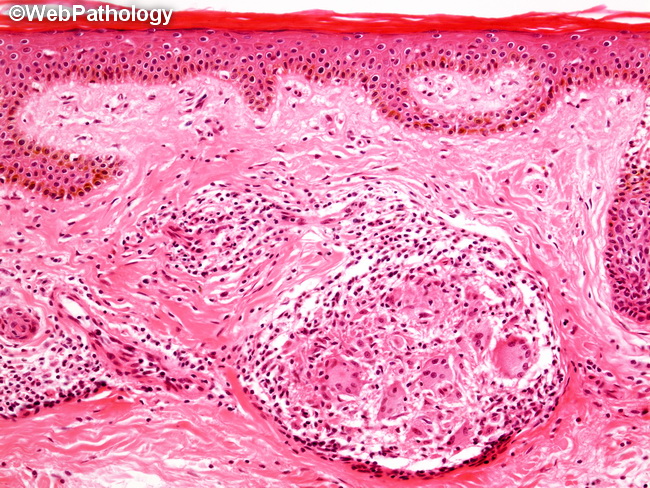 Comments:
Tuberculoid leprosy is seen in patients with a robust cell-mediated immunity which prompts a granulomatous macrophage response. There is preponderance of CD4+ T-helper cells over CD8+ T-suppressor cells and no antibody response to M. leprae. The chronic delayed hypersensitivity reaction eliminates bacteria from the lesional tissue which are therefore difficult to find with modified acid-fast stains. Tuberculoid leprosy is characterized by infiltration of dermis and subcutaneous fat with non-caseating epithelioid granulomas. The granulomas are predominantly centered around small cutaneous nerves and may even have serpentine shapes as they follow the nerves. The nerve may be completely destroyed in the process and replaced by granulomatous infiltrate. In patients with clinical skin lesions, the inflammation extends upwards to involve papillary dermis and epidermis. In tuberculoid leprosy, there is no grenz zone unlike in borderline tuberculoid and more lepromatous forms. Langhans giant cells and numerous lymphocytes (T-helper cells) are present in the granulomas. The bacilli are scarce and usually not identified with modified acid-fast stains. The close association of granulomatous response with the cutaneous nerves is a helpful diagnostic feature in tuberculoid leprosy.