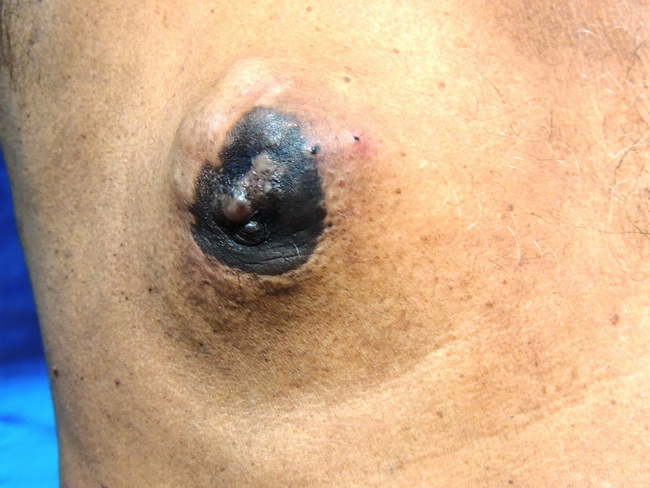 Comments:
Carcinoma of male breast comprises 1% of all breast cancers in the United States, but it is more common in Arab countries. An association is also seen with Klinefelter's Syndrome. Some cases of breast cancer in males have occurred in patients with prostate cancer treated with estrogens. All microscopic variants seen in female breast have also been encountered in males. Case History: This 64 year male was operated 18 months back for enlargement of his right breast. The diagnosis was adenocarcinoma, NOS, of breast. He was lost to follow-up and subsequently presented with a recurrent tumor. Examination showed an ill-circumscribed right breast mass measuring 8 cms in the largest diameter. The skin over mass was indurated, erythematous and fixed to the subcutaneous lesion. Note the absence of nipple and irregular spreading of areolar pigmentation. The microscopic examination of the lesion showed high grade invasive adenocarcinoma of breast NOS. Case courtesy of: Dr. Sanjay D. Deshmukh, Professor of Pathology, Vithalrao Vikhe Patil Foundation's Medical College & Hospitals, Ahmednagar, India..