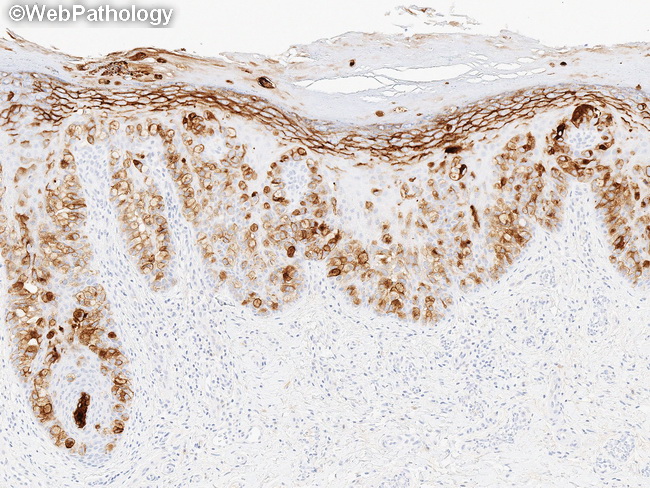 Comments:
Immunohistochemical Profile of Mammary Paget disease (PD): Low molecular weight cytokeratins (CAM5.2, CK7), AE1/AE3, and EMA are positive in the vast majority of cases of Paget disease (PD). CK7 is the single best marker for PD. However, CK7 immunoreactivity should be interpreted carefully in the context of morphologic findings since it is also positive in normal Toker cells and Merkel cells. Actinic keratosis and pagetoid Bowen disease may also be CK7 positive. CK20 and p63 are usually negative in PD. HER2 is strongly positive (membranous staining) in both Paget cells as well as the underlying invasive carcinoma, when present. ER is negative or weakly positive and PR is usually negative in PD. Extramammary PD does not show strong expression of HER2. GATA-3 is another sensitive marker for PD. CEA (shown here) and GCDFP-15 are variably positive in about 35% of cases of PD. S-100 protein is positive in about 20% of cases; however, Melan-A, SOX10, and HMB-45 are negative.