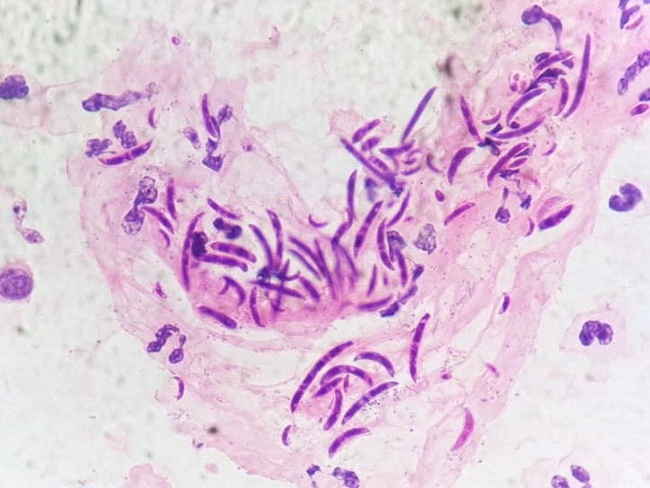 Comments:
Fusarium is a filamentous fungus that is widely distributed in plants and soil in tropical and subtropical climates. It is a common plant pathogen; however, it has become increasingly recognized as a causative agent of several types of superficial and systemic infections in humans. Most human cases of fusariosis are caused by F. solani, F. oxysporum, and F. moniliforme. However, atypical strains have emerged as important causative agents in immunocompromised patients. Fusarium species have been reported as causative agents in: keratitis, endophthalmitis, onychomycosis, cutaneous infections (particularly of burn wounds, mycetoma), endocarditis, peritonitis, septic arthritis, catheter-associated fungemia, and, rarely, urinary tract infections (as seen in this case). Disseminated opportunistic infections can occur in immunocompromised hosts. Fusarium-caused urinary tract infection may occur in the setting of urolithiasis. Fusarium is one of the most drug-resistant fungi. Invasive infections are often fatal. The treatment for systemic infections consists of amphotericin B alone or in combination with rifampin or flucytosine. Case History: The patient was a 59 y/o male with history of chronic liver disease who presented with hematuria. There was no history of diabetes. Urine cytology was negative for malignant cells. The image shows several sickle or fusiform-shaped macroconidia with 1-4 septa. The appearance is diagnostic of fusarium. Case courtesy of: Sunita Kolekar-Samleti, MD, Dept. of Pathology, Apollo Hospital, Vishakhapatnam, Andhra Pradesh, India.