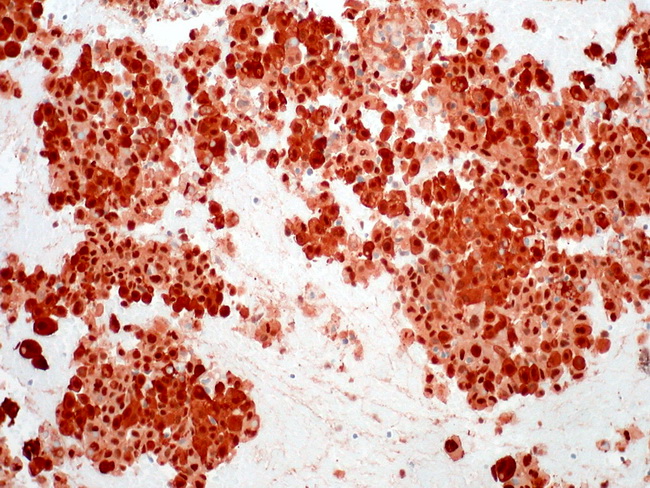 Comments:
Immunohistochemical stains play a vital role in the diagnosis of amelanotic, spindle cell, and epithelioid variants of melanoma and their distinction from poorly-differentiated carcinomas as well as mesenchymal tumors. A classic case of melanoma is immunoreactive for S-100 protein, HMB-45, Melan-A, tyrosinase, Microphthalmia Transcription Factor (MITF), and vimentin. S-100 protein is a highly sensitive marker for melanomas but lacks specificity. It is positive (both nuclear and cytoplasmic staining) in 94-100% of primary and metastatic tumors. However, it is also positive in a variety of mesenchymal cells and their tumors, including Schwann cells, myoepithelial cells, adipocytes, chondrocytes, and Langerhans cells. Some breast carcinomas and undifferentiated carcinomas may also stain with S-100 protein. The image shows S-100 protein immunoreactivity in metastatic melanoma in the liver (FNA specimen, clot section). Image courtesy of: Ed Uthman, MD, Houston, Texas, USA. OTHER USEFUL MARKERS: Microphthalmia Transcription Factor (MITF) is a nuclear protein that is involved in lineage-specific regulation of many cell types including melanocytes, osteoclasts, and mast cells. It is necessary for the development and survival of melanocytes during embryogenesis. MiTF interacts with PAX3 and MSG1 gene products and controls the activity of melanogenic enzymes like tyrosinase by upregulating cyclic AMP pathway. MiTF labels nevi and epithelioid melanomas but it is less strongly expressed in spindle cell and desmoplastic variants. Similar to other melanocytic markers, MiTF also stains PEComas (angiomyolipoma, lymphangiomyomatosis, and clear cell sugar tumor of lung). TYROSINASE: Tyrosinase catalyzes synthesis of melanin from tyrosine. Immunoreactivity for tyrosinase is seen in 90% of melanomas. It is also positive in peripheral nerve sheath and neuroendocrine tumors. SOX10 is a recently described marker that is required for the growth and development of melanocytes and Schwann cells. Nuclear expression of SOX10 is seen in the majority of nevi and melanomas, benign neural tumors, schwannomas, neurofibromas, and malignant peripheral nerve sheath tumors. It is strongly and diffusely expressed in spindle cell/desmoplastic melanomas and is useful in their differentiation from scar. Ki-67 has been used to distinguish between benign melanocytic nevi (less than 5% of nuclei are positive, usually in the superficial part of the dermal component) and melanoma (25% or more nuclei are positive). Ki-67 is also an independent prognostic marker and increased expression is associated with poor disease-specific survival. Ki-67 labeling index is related to mitotic activity – a feature which is a component of the AJCC staging system for melanomas. Melanomas can express keratins (10% of cases), EMA, and CEA. The staining patterns in metastases may be different from those in the primary tumor. Desmoplastic melanomas may express muscle markers, including smooth muscle actin and desmin. CD68 may be positive in melanomas – a point to be kept in mind when the differential diagnosis is between balloon cell melanoma and xanthomatous lesions. Reduced expression of Bcl-2 is seen in melanomas and correlates with disease progression. Cyclin D1 can be useful in differentiating between benign nevus (no or limited expression in the superficial cells) and melanoma (full thickness expression in 60% of cases). Overexpression of cyclin D3 is linked to early relapse and reduced survival.