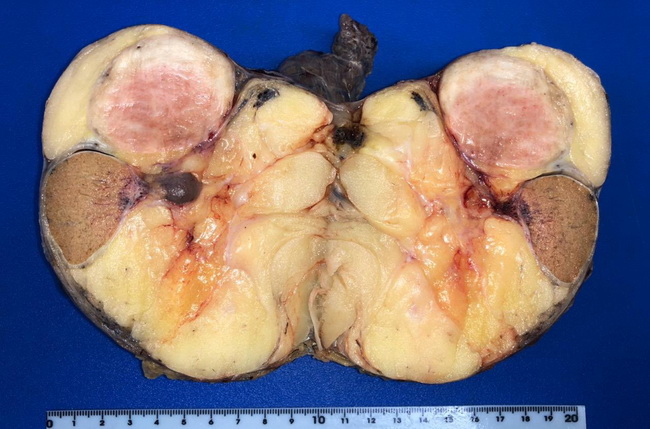 Comments:
Progression to a higher-grade (dedifferentiation) is a late complication in the natural history of well-differentiated liposarcomas. It occurs after a latent period of several years. Dedifferentiated liposarcomas (DL) account for about 18% of liposarcomas. The peak incidence of DL is seen in 7th decade. Tumors located in the retroperitoneum are more likely to undergo dedifferentiation than those in deep soft tissues of the extremities, head & neck region, or spermatic cord. Grossly, the dedifferentiated foci appear as ill-defined firm tan-gray areas or as sharply defined grayish-white nodule in a multilobulated yellow lipoma-like mass (as shown in this image). Image courtesy of: Felipe D'Almeida, MD, Sao Paulo, Brazil; used with permission