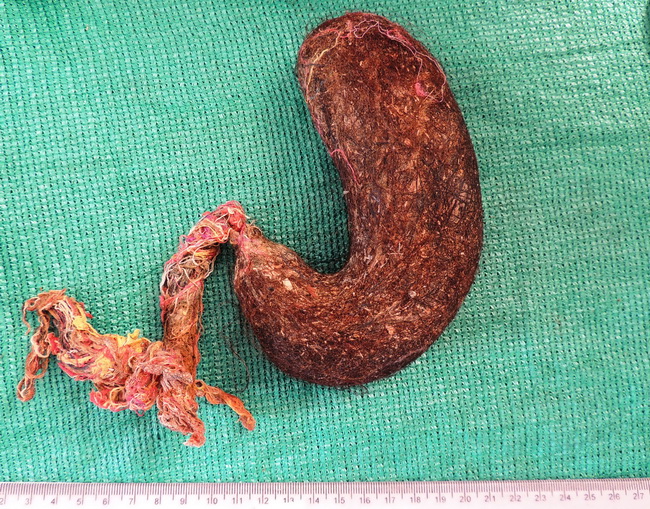 Comments:
Definition: Bezoars are collections of indigestible material in the gastrointestinal tract, usually in the stomach. The three most common types of bezoars are phytobezoar, trichobezoar, and pharmacobezoar. PHYTOBEZOAR: It is the most common type of bezoar and consists of vegetable matter. It may develop following consumption of large quantities of fruits and vegetables such as celery, pumpkin, prunes, raisins, leeks, beets, and persimmon. These sources contain large amounts of indigestible fibers such as cellulose, hemicellulose, lignin, and tannin. TRICHOBEZOAR: This is usually seen in young women and children and forms when the individual ingests a large amount of hair, carpet fiber, or clothing fiber (as seen in this specimen). Frequently, the patient has mental retardation, a psychiatric disorder, or pica. PHARMACOBEZOAR (medication bezoar): It can occur when a patient ingests large quantities of fiber-containing or extended release medications that are difficult to digest. The active ingredient may get trapped in the bezoar reducing its bioavailability and efficacy. Occasionally, the accumulated active ingredient may get released all at once into the intestines causing toxicity. Clinical Features: Majority of the patients with bezoars (except trichobezoars) have a predisposing factor that slows down gastric emptying such as prior gastric surgery. Other risk factors for bezoars include lack of teeth, diabetes mellitus, end-stage renal disease and patients on mechanical ventilation. Many patients are asymptomatic. Most of them complain of epigastric discomfort, anorexia, nausea, vomiting, weight loss, and early satiety. Gastric ulcers may develop due to pressure necrosis of the gastric wall. Large bezoars can cause gastric bleeding and gastric outlet obstruction. Bezoars may extend from stomach, past the pylorus, into the duodenum - a condition referred to as RAPUNZEL SYNDROME (shown in this image). Such cases can present with intestinal obstruction, jaundice, and even pancreatitis due to the blockage of the ampulla of Vater. Case History: This specimen of trichobezoar is from a young female who presented with vomitting, anorexia, and abdominal pain of several months' duration. On examination, the patient was emaciated and had a well-defined hard lump in the epigastric region. There was history of a psychiatric disorder for which she had been treated intermittently. CT abdomen with contrast showed a grossly distended stomach with heterogenous intraluminal contents. There were fiber-like hyperdensities and scattered lucencies suggestive of a bezoar. The mass was removed by upper midline exploratory laparotomy with anterior gastrostomy. It was composed of hair and fabric fibers and extended into the duodenum (Rapunzel syndrome). Case courtesy of: Dr. Sanjay D. Deshmukh (Professor of Pathology) and Dr. Jayant M. Gadekar (Professor & Head of Surgery), Dr. Vithalrao Vikhe Patil Foundation's Medical College and Hospitals, Ahmednagar, India.