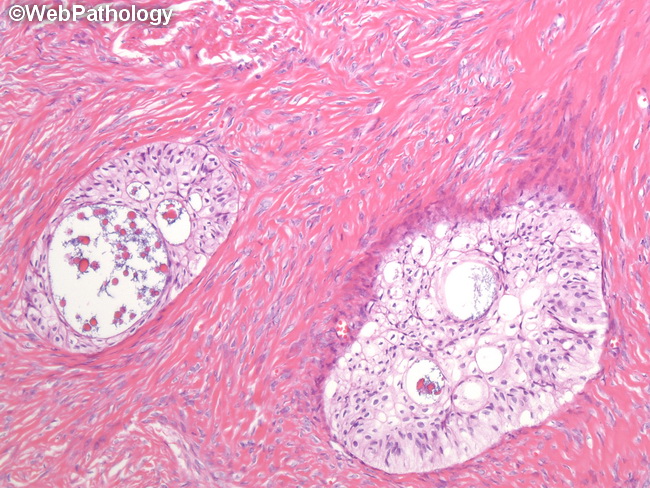 Comments:
Benign Brenner tumors (BTs) are composed of cells resembling mature transitional epithelium (urothelium) arranged in sharply defined solid clusters, nests and trabeculae within a dense fibromatous stroma. Some of the nests show central cystic spaces containing mucin or eosinophilic secretions. Cystic change may be prominent in some cases producing grossly visible cysts on cut surface. The cystic spaces may be lined by transitional, flattened, cuboidal, or columnar epithelium. Squamous metaplasia or prominent mucinous change may be seen within some nests. The transitional cells have pale eosinophilic or clear cytoplasm, uniform round or ovoid nuclei which may have grooves, fine chromatin, and punctate nucleoli. There is no cytologic atypia and mitotic activity is not increased. The stromal component resembles ovarian fibroma or thecoma. It may become hyalinized or show dystrophic calcification. The stroma may become luteinized in some cases and produce estrogenic or androgenic manifestations.