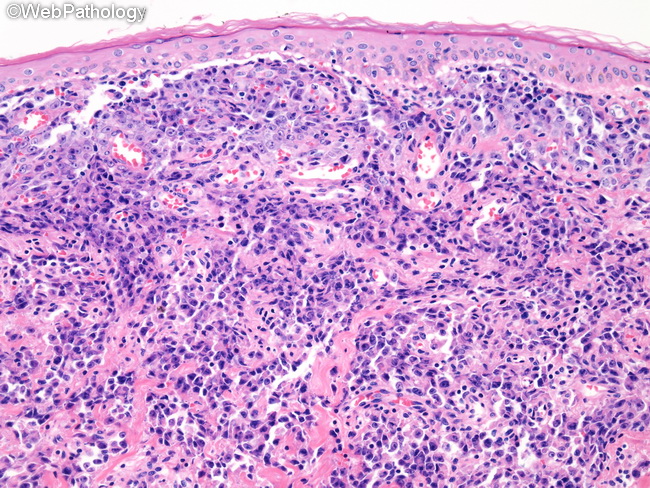 Comments:
Post-radiation Angiosarcomas: They make up about 25% of all angiosarcomas and are seen in the following clinical settings:

The incidence of angiosarcoma in previously irradiated breasts is estimated to be 0.16%. The location tends to cutaneous, with very few cases involving the breast parenchyma itself. The latent period is around 5 years but may be as short as 3 years. This is shorter than latency at other locations, perhaps due to the large surface area of skin over the breast. High doses of radiation are involved with a mean dosage of 50 Gy. Clinical Features: The lesions are large and multifocal and present as bruise-like, indurated, ecchymotic or multinodular areas in a background of radiation-damaged skin. Most patients come with complains of a rash and the clinical appearance can mimic infectious mastitis or inflammatory breast carcinoma. There is no associated lymphedema. Case History (images 37-40): The patient was an elderly female who underwent lumpectomy, axillary lymph node dissection, and radiation for invasive ductal carcinoma of breast. She presented with a breast mass 9 years later (same breast). An incisional biopsy was interpreted as poorly-differentiated recurrent invasive ductal carcinoma resulting in a mastectomy. The mastectomy specimen showed multiple reddish-purple macular areas on the skin and hemorrhagic lesions in the subcutaneous tissues. The tumor was poorly-differentiated with epithelioid morphology and located largely in the skin and subcutaneous tissues with focal invasion of breast parenchyma as well as chest wall structures. The peripheral portion of the tumor had more typical morphology of angiosarcoma consisting of anatomosing vascular channels lined by atypical endothelium (next three images). The tumor cells were positive for endothelial markers CD31, CD34, ERG, and claudin 5 and Factor VIII-related antigen as well as PROX1; they were negative for EMA, CAM5.2, AE1/AE3, S-100, and HMB-45. There was strong nuclear MYC immunoreactivity indicating MYC gene amplification which is a feature of radiation-associated angiosarcomas. However, this feature may also be seen in other malignancies and is not specific for radiation-induced angiosarcomas.
Advertisement