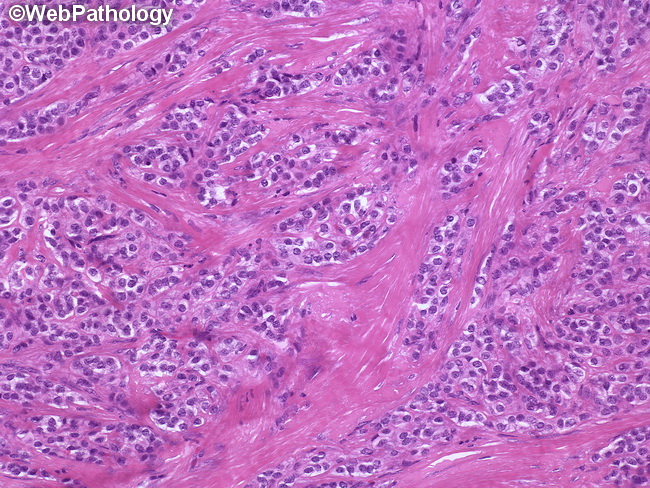 Comments:
Leydig Cell Tumor (LCT) - Treatment and Prognosis: Radical inguinal orchiectomy is the initial treatment of choice. Testis-sparing surgery and enucleation has been tried in pediatric patients. About 95% of LCT are benign. The rare cases (<5%) that are clinically malignant are associated with two or more of the following features: large size (>5 cm), infiltrative borders, cytologic atypia, increased mitotic activity (>3 mitoses/10 HPF), vascular invasion, and necrosis. However, it must be mentioned that these histologic criteria for malignancy in LCT are not consistently reliable. Rare cases (< 1%) with no pathologic risk factors of malignancy may still behave in a malignant fashion. The only definitive criterion for malignancy is the presence of metastasis. Metastases usually occur to the lungs and retroperitoneum. If the pathologic features indicate the likelihood of malignancy, abdominopelvic CT and chest CT are performed. Retroperitoneal lymph node dissection may also be considered in selected cases. Metastatic LCT are usually resistant to chemotherapy and radiation. Leydig cell tumor of the testis showing sheets, nests, and trabeculae of a uniform population of cells separated by thick fibrous bands.